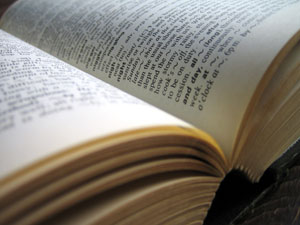 Developing a great vocabulary is one of the most overlooked ways to improve our lives. It is often believed that learning many words is only useful for writers and speakers, but the truth is that everyone benefits from it, both personally and professionally.

Contrary to what some people believe, the point of having a good vocabulary is not to use fancy, arcane or complicated words to impress or confuse other people. In order to be effective, communication has to be simple. What’s the point in learning so many new words? Doesn’t that only make using language more complicated?

Think of your vocabulary as your “communication toolbox”: every word is a tool, ready to be used at the right time. The more tools you master, the better your chances are of finding the right one for the communication task at hand. But having a huge stock of words at your disposal is not the ultimate goal. Every time you grasp a new word, you end up with more than just a new tool: you understand the ones you already know better.

By comparing the meaning of new words with the ones you already know, you understand them in a deeper way, enabling you to choose them more effectively. More often than not, this means knowing the easier words and their meaning more thoroughly. Hence, a good vocabulary often makes your communication simpler – and not the opposite as many people think.

My favorite story that illustrates the importance of vocabulary is from George Orwell’s dystopian novel Nineteen Eighty-Four.

In a dark view of the future, Orwell pictured a world ruled by an authoritarian government that controls every citizen. In this world, no one escapes being watched by video cameras, which are present even inside people’s homes. But when it comes to control, there was something even more effective than the ubiquitous cameras, and that was the official language: Newspeak.

Newspeak is rigidly controlled by the government, and it’s the only language whose vocabulary gets smaller every year. In Newspeak, words that convey subversive thoughts – like “freedom” – simply don’t exist anymore. By systematically removing or distorting the meaning of words, the government takes away the tools to question its authority. Without words to exchange or perpetuate ideas, these ideas start to gradually disappear from people’s minds. Without not even being aware of it, people became completely powerless and easily controlled.

Although this example may be a bit extreme, it serves to illustrate the point: when you lack words, you shut down new insights and lines of reasoning. People who possess a limited vocabulary have a much tougher time breaking out from old patterns of thought or questioning. By the same token, each new word you learn opens a new avenue of thought, empowering you to think or take action in ways you could never have before.

Vocabulary Gets You Results

The researcher Johnson O’Connor, known for his studies about the impact of vocabulary on people’s lives, has drawn many amazing conclusions from a vast amount of tests and experiments, performed in more than 20 years of research.

A significant part of his research observed successful people in many walks of life, trying to correlate their success with factors such as gender, age, scholarship levels and many others, including vocabulary level. He tested people on the most diverse endeavors, such as students about to take their SATs, engineers working in their areas of expertise, executives in large corporations and many others.

He always found the same results, no matter which area he looked at, and no matter how he analyzed the data: a person’s vocabulary level is the best single predictor of occupational success.

This astounding discovery can be illustrated by the following study, made with managers in 39 large manufacturing companies. Below are the average results of an extensive vocabulary test, averaged and grouped by hierarchical level: 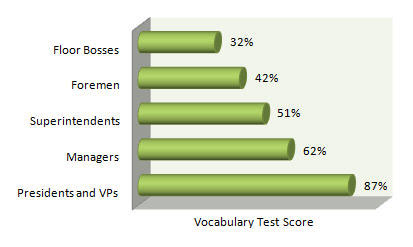 O’Connor took extreme care to statistically isolate variables that could distort the results. Scholarship level and age, for example, were taken into account to make sure it was indeed vocabulary, and not something related, that correlated with success. His studies also show that vocabulary usually comes before achievement, and not as a consequence of it. Even if we’re not able to ultimately prove the correlation, it’s hard to ignore O’Connor’s findings.

What determines professional success? Especially for knowledge workers, I would risk saying professional success depends entirely on thinking and communication skills. If you analyze every activity you perform as a knowledge worker, you’ll always get down to either thinking (as the activity that leads to the creation of something new) or communicating (as the activity that gets your ideas across). Well, if words are tools for both thought and communication, it’s no surprise that those who master them have a much greater chance of success – not only professionally, but in their lives as a whole.

How About Improving Your Own Vocabulary?

If you decide to give your vocabulary a boost, the good news is that you won’t need to go back to school or do boring word exercises. You take the most important step just by understanding why you should improve and by your willingness to do so.

For specific ways to improve your vocabulary, please check the article ‘10 Sure-Fire Strategies to Improve Your Vocabulary‘