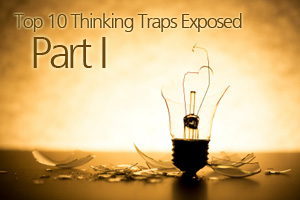 Our minds set up many traps for us. Unless we’re aware of them, these traps can seriously hinder our ability to think rationally, leading us to bad reasoning and making stupid decisions. Features of our minds that are meant to help us may, eventually, get us into trouble.

Here are the first 5 of the most harmful of these traps and how to avoid each one of them.

“Is the population of Turkey greater than 35 million? What’s your best estimate?”
Researchers asked this question to a group of people, and the estimates were seldom too far off 35 million. The same question was posed to a second group, but this time using 100 million as the starting point. Although both figures were arbitrary, the estimates from the ‘100 million’ group were, without fail, concomitantly higher than those in the ’35 million’ group. (for the curious, here’s the answer.)

This trap is particularly dangerous as it’s deliberately used in many occasions, such as by experienced salesmen, who will show you a higher-priced item first, “anchoring” that price in your mind, for example.

2. The Status Quo Trap: Keeping on Keeping On

In one experiment a group of people were randomly given one of two gifts — half received a decorated mug, the other half a large Swiss chocolate bar. They were then told that they could effortlessly exchange one gift for the other. Logic tells us that about half of people would not get the gift they prefered and would hence exchange it, but in fact only 10% did!

We tend to repeat established behaviors, unless we are given the right incentives to entice us to change them. The status quo automatically has an advantage over every other alternative.

You pre-ordered a non-refundable ticket to a basketball game. On the night of the game, you’re tired and there’s a blizzard raging outside. You regret the fact that you bought the ticket because, frankly, you would prefer to stay at home, light up your fireplace and comfortably watch the game on TV. What would you do?

It may be hard to admit, but staying at home is the best choice here. The money for the ticket is already gone regardless of the alternative you choose: it’s a sunk cost, and it shouldn’t influence your decision.

(This example is from an earlier article which focuses entirely on the sunk cost effect. Check it out if you want to know more.)

4. The Confirmation Trap: Seeing What You Want to See

You feel the stock market will be going down and that now may be a good time to sell your stock. Just to be reassured of your hunch, you call a friend that has just sold all her stock to find out her reasons.

Congratulations, you have just fallen into the Confirmation Trap: looking for information that will most likely support your initial point of view — while conveniently avoiding information that challenges it.

This confirmation bias affects not only where you go to collect evidence, but also how you interpret the data: we are much less critical of arguments that support our initial ideas and much more resistant to arguments against them.

No matter how neutral we think we are when first tackling a decision, our brains always decide — intuitively — on an alternative right away, making us subject to this trap virtually at all times.

Harry is an introverted guy. We know that he is either a librarian or a salesman. Which one do you think he most probably is?

Of course, we may be tempted to think he’s almost certainly a librarian. Haven’t we been conditioned to think of salesmen as having outgoing, if not pushy, personalities? Too bad this reasoning may be dead wrong (or at least incomplete).

This conclusion neglects the fact that salesmen outnumber librarians about 100 to 1. Before you even consider Harry’s character traits, you should have assigned only a 1% chance that he’s a librarian. (That means that even if all librarians are introverted, all it takes is 1% of introverts among the salesmen to make the chances higher for Harry being a salesman.)

That’s just one example of how overlooking a simple data element can make our intuitions go completely astray. We keep mental images — simplifications of reality — that make we jump to conclusions before questioning assumptions or checking whether we have enough information.