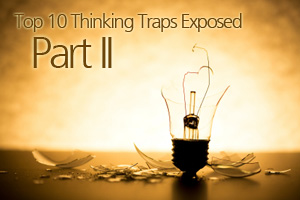 In the first part of this article, we focused on 5 traps that hinder our ability to think rationally. As a quick recap, we discussed:

Now it’s time to complete the list and expose the remaining 5 dangerous traps to be avoided. Let’s dive right in.

6. The Conformity Trap: Everybody Else Is Doing It

In a series of experiments, researchers asked students in a classroom a series of very simple questions and, sure enough, most of them got the answers right. In another group, they asked the same questions but this time there were actors posing as students, purposefully pushing wrong answers. This time around, many more students provided wrong answers based on the leads from the researchers’ assistants.

This “herd instinct” exists — to different degrees — in all of us. Even if we hate to admit it, other people’s actions do heavily influence ours.
We fear looking dumb: failing along with many people is frequently not considered a big deal, but when we fail alone we must take all the heat ourselves. There’s always peer pressure to adopt the behaviors of the groups we’re in.

This tendency to conform is notoriously exploited in advertising. Businesses often sell us products not based on their features, but by showing how popular they are: since others are buying it in droves, why would we not join them?

Conformity is also one of the main reasons why once a book makes into a well-known best-sellers list, it tends to “lock in” and continue there for a long time. People like to consume what “everybody else” is consuming.

7. The Illusion of Control Trap: Shooting in the Dark

Have you noticed that the vast majority of lotto players pick their own numbers instead of using the sometimes available ‘auto-pick’ option (where the point of sales terminal chooses the numbers for you)? We all know that however the numbers are chosen doesn’t change the chance of winning, so why the strong preference for picking our own numbers?

Curiously, even in situations we clearly can’t control, we still tend to irrationally believe that we can somehow influence results. We just love to feel in control.

Of course, it’s always easier to illustrate this trap with chance games, but the tendency to overestimate our personal control of events influences every aspect of our daily lives.

Unfortunately, contrary to the lottery example above, the outcomes of our decisions are usually complex and interconnected. It’s hard to assess to what extent we’re responsible for the results we get. While some of the outcomes can be traced back to our own choices, a part of them will surely remain just as well out of our direct control.

8. The Coincidence Trap: We Suck at Probabilities

John Riley is a legend. He won a one-in-a-million-chance lottery… twice! That makes it a 1-in-a-trillion event — which means that the lottery is rigged or maybe John must have been singled out by Lady Luck, right?

Well, not really. Let’s try a little math: If, throughout the years, 1000 lottery winners keep playing at least 100 times attempting the “miracle” of winning it once more, that adds up to a non-negligible chance of 10% that someone will make it.

This means that the “miracle” is not only possible but — given enough attempts — its likelihood increases to a point of becoming almost inevitable.

Another classic example: it takes a group of just 23 people to make it more likely than not that two of them share the same birthday (day and month).

That’s how unintuitive probabilities are.

9. The Recall Trap: Not All Memories Are Created Equal

What’s your best guess for the probability of a randomly selected flight ending in a fatal crash? While many people grossly overestimate it, MIT studies show that in reality these fatal accidents happen at a rate of only 1 in 10,000,000.

The fact that people suck at estimating probabilities explains only partially this tendency to mis-estimate: if you ask the same question right after a major airplane accident, be prepared for even more biased assessments.

What happens is we analyze information based on experience, on what we can remember from it. Because of that, we’re overly influenced by events that stand out from others, such as those with highly dramatic impact or very recent ones. The more “special” an event is, the greater the potential to distort our thinking. Of course, no one ever bothers about the other 9,999,999 planes that arrive safely at their destinations — so there’s nothing more natural than forgetting about them.

10. The Superiority Trap: The Average is Above Average

A study surveyed drivers asking them to compare their driving skills to other people in the experiment.
Almost all the participants (93%!) rated themselves as ‘above average’.

With few exceptions, people have much inflated views of themselves. They overestimate their skills and capabilities, leading to many errors in judgment.

And this is the reason I decided to close this article with this particular thinking trap. After making ourselves aware of these many thinking traps, we may now become susceptible to falling into a new one: the belief that we’re now immune to them.

Of course, the first step to avoid thinking traps is awareness and constant vigilance, but beware: it’s much, much easier to notice others falling into these traps than us.

These ten thinking traps barely scratch the surface when it comes to how our thinking can be biased. Wikipedia’s list of cognitive biases has more than 100 of these traps, making it a hard-to-beat starting point for further learning.

The references for the studies that back up the data in this article can be found on the respective articles on Wikipedia, as well as on the book Smart Choices. That’s a marvelous book about decision making, and one which I highly recommend. Another great book to check out is Thomas Gilovich’s How We Know What Isn’t So.

I hope you enjoyed the article. And just in case you missed it, here’s part 1, where you can find the first 5 thinking traps we started with.