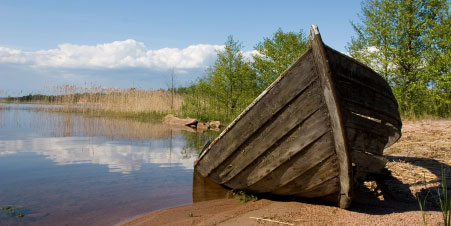 The sunk cost bias is a thinking trap that not only slows down personal improvement efforts, but one which can make people literally waste their whole lives on — something I’ve seen happening with disturbing regularity. The good news is that, like most thinking traps, the biggest step you can take to overcome it is by simply becoming aware of it.

Suppose you pre-ordered a non-refundable ticket to a basketball game. However, on the night of the game, you simply don’t feel like going anymore: you’re tired, there’s a blizzard raging outside, and the game will be televised. You regret the fact that you bought the ticket because, frankly, you would prefer to stay at home, light up your fireplace and comfortably watch the game on TV.

But the fact is that you did buy the ticket — and it was quite expensive and hard to get. What would you do?

Sunk costs are costs that are irrecoverable. It’s something that you already spent and that you won’t get back, regardless of future outcomes. It’s like that gym club membership you bought: whether you get its benefits or not, the money is gone and there’s no way to get it back.

In the basketball game ticket example, the point is that the money is already gone, so now you are better off doing what pleases you best. So, unless you can sell the ticket, just forget about what you paid for it. You are better off using it to help fuel the fireplace while you comfortably enjoy the game on TV.

This is, of course, easier said than done. There are many psychological blocks in the way of simply discarding an expensive ticket. And if that holds true for a mere basketball game ticket, imagine how strong that effect is when it comes to, say, abandoning a long-time relationship that you invested so much time on, but that just isn’t working anymore.

That’s the sunk cost bias. It’s what you may have heard as “throwing good money after bad”, but it isn’t just about money: any type of investment you make — time, money, effort, anything — is subject to this thinking trap.

Are You a Victim of the Sunk Cost Bias?

Persisting with bad decisions due to our irrational attachment to costs that we cannot recover has become so common that you can find them just about anywhere. Big organizations and governments excel at it. (A government that insists on a war so the lives already spent “are not wasted” comes to mind, but I digress…)

The fact is that this mental trap permeates our decision making and affects not only organizations, but it deeply affects us at a personal level, too. Check out some examples:

So, if dwelling on sunk costs is a bad idea, why do we do it? More importantly, how do we overcome this thinking trap? Here are 4 main reasons why we do it, along with ways to overcome each of them.

1. We Want to Make the Investment Worth Our While

This is the fundamental reasoning behind how we deal with sunk costs. We have a genuine interest in making our efforts worth our while. We don’t want to feel that we spent anything in vain — time, money, anything. However, even if we know deep inside that our approach is wrong, we still have trouble abandoning it.

Sure, we all expect to have a good return on what we invest. It would be insane not to. Just make sure you’re not on a situation solely because you made the investment in the first place. You don’t make a bad move any better by dwelling more on it, unless you can effectively make something that changes the expected outcome.

2. We Fear Failing and Looking Foolish

We live in a success-oriented culture. Cutting losses means admitting you made a mistake, if not in public, at least to yourself. Our egos will always stubbornly try to hold us to our commitments, so we don’t need to admit our imperfections. If you made a public commitment, you’re even less likely to break it, as there will probably be a lot of explaining to do.

Allow yourself to make mistakes. Quickly admitting your mistakes is much more productive than entrenching yourself in a situation just to “save face”. Be aware that quitting is not failing (actually, sometimes it’s exactly the opposite).

Better yet, do like Socrates and think differently: become proud of admitting your errors. Change your attitude from hiding mistakes to actively exposing them. Look for them: the more, the merrier. You’ll surely feel defenseless and uneasy at first, but once you get used to it, you’ll feel invulnerable to harsh criticism.

Moreover, instead of focusing on the sunk costs, take pride in having recognized the costs associated with sticking to the old approach.

3. We Become Attached to Our Commitments

After we decide to do something, we feel attached to what we committed to. And the bigger the commitment, the harder it is to let go. Not only that, but it’s a human trait to be overconfident that everything we set ourselves to do will pay off. We’re biased when we evaluate the probability of success of already-made commitments. (This is known as overly optimistic probability bias.)

Be aware of the natural bias to stay on your current course of action. While considering other options, evaluate the status quo as it was just another option, rather than the front-runner.

Also, try to detach yourself emotionally from your past decisions. Be especially careful with things that worked at some point in the past as this is not a guarantee that they’ll work in your favor again.

I like to practice what I call “zero-based thinking”. Forget about the past and consider this very moment as your “point-zero” in time: act like all you have is the present. I often do this by pretending that I just woke up with some sort of amnesia. I imagine myself in my current situation, but without any knowledge of how I got there. This way, it’s much easier to focus on my current situation, instead of clinging to past decisions that would drag me down.

4. We Lose Sight of Our Underlying Goals

Sometimes we become so preoccupied by how much time and effort we put into something that we lose sight of its relevance in the greater scheme of things. We become attached to the means and forget about the ends.

Always be mindful of long-term objectives. Don’t confuse any greater goal you want to achieve with the specific means of implementation you’re attached to. Don’t get caught up in justifying your current actions.

Moving away from the basketball game example, suppose your original goal was to have fun, so you rented a movie. If the movie turns out to be a bad one, don’t forget that your goal was not to spend two hours watching a movie, but to have fun. So, turn it off and go have fun, somehow.

Let Go of the Past, Move On

I’m not recommending that you become a quitter by any means. The point is to be always aware of your current situation. If you decide to stick with your current approach, that’s great. Do it consciously and for the right reasons.

And remember that the greatest example of sunk cost you pay is with your own time, and which you will not be able to recover: all that you lived up until now is gone — you just can’t reclaim that time. Stop clinging to the past and make the most of your life right now.