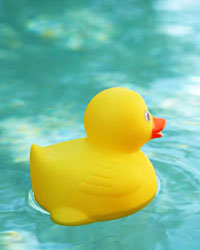 How can this deceptively simple strategy work so well? How can we leverage it, transforming it in a problem-solving technique we can use at anytime?

The Magic Behind Explaining Problems Out Loud

Communicating your problems out loud has several advantages over silently thinking about them:

In order to put your problem in a communicable form you must clarify it, stating it in objective terms. To articulate your message, you are forced to mentally organize all information you have about the problem. Moreover, by making your problem explicit, you free it from useless psychological noise, such as your anxiety or frustration for not being able to solve it.

Putting your problem in words will tremendously help you grasp it: language is not only a tool of communication as many believe, but also a tool of thought (for more on that, check ‘Top 3 Reasons to Improve Your Vocabulary‘).

Explaining your problem to someone else is particularly effective when you assume no knowledge on the other person’s part. A good rule of thumb that works especially well for technical problems is pretending you’re explaining them to your grandma.

By assuming the other person’s total lack of knowledge on the subject, you focus on explaining what you know, instead of focusing on figuring out solutions. By making your knowledge and assumptions explicit, you often access different or overlooked data, and thus access entirely new avenues of thought.

3. Engaging Different Parts of the Brain

Saying the problem out loud engages many more areas of the brain than merely thinking about it. That’s why pretending that you’re explaining the problem to someone — but doing so only in thinking — is of little use. According to cognitive philosopher Daniel Dennett:

“[…] consciousness developed as a way to internalize talking to oneself. Speaking words triggers parts of the brain involved in moving the diaphragm, tongue, lips, vocal chords, etc. Hearing words triggers parts of the brain connected to the ears. Speaking aloud can be a bad survival strategy, especially when you’re thinking about the chief’s wife, so we developed consciousness as an internal monologue. It works, but it doesn’t exercise as many areas of the brain as speaking and hearing your own words. […]” (source: WikiWikiWeb).

If explaining a problem is usually enough to solve it by itself, why would you need someone listening to you?

You don’t. Next time you’re stuck with a problem, why don’t you try explaining your problem to an inanimate object, such as, say, a rubber duck?

If it serves to reduce your resistance and feeling of weirdness towards the idea of explaining problems to objects, be aware that the concept is rather popular in the software development industry. There’s even a term coined for it: ‘rubber ducking’ (popularized by the book The Pragmatic Programmer, a must-read for software developers).

“Are you saying I should replace real people and start talking to rubber ducks?”

Well, not replacing — but what about developing the habit of always consulting your rubber duck first? I don’t mean to slight us humans, but rubber ducks do in fact have some advantages:

Give rubber ducking a try. Once you get past the initial odd sensation of talking to a thing, you’ll certainly enjoy the feeling of convenience and independence it brings; not to mention you’ll also save a lot of your time as well as other people’s.

And, in case the rubber duck doesn’t solve your problem, just go ahead and explain it again to a friend. By then, you’ll have the problem much more well-defined and articulated, dramatically increasing the chances that that friend will be able to help you.

You should always practice rubber ducking out loud — but there are situations when you can’t make noises or simply can’t afford the social awkwardness of it (“excuse me while I talk to my duck…”). Fear not: do your rubber ducking in writing instead — sure, you won’t have the benefits of verbalization, but the technique still works fine.

One way to do it that works particularly well is to write an e-mail message explaining your problem. Pretend you’re going to send it to the smartest (and busiest) person in the world. Describe the problem in detail, the solutions you tried so far and why they didn’t work. List your assumptions and make sure you include all relevant information. Be both thorough and objective.

When you are done writing the message, you’ll probably have had many ideas to try out. If not, find a specialized forum and just send it as it is: with your perfectly-crafted message, I’m sure the Internet gods will help you.

Get Your Own Rubber Duck

Ready to start rubber ducking? As you imagined, there’s not much to it, except getting yourself a rubber duck. Well, it doesn’t need to be an actual rubber duck – any inanimate object will do. But it pays off choosing one that you really like: this will be a long-term relationship, after all. 🙂

Here are some suggestions:

As for me, my dedicated problem-solver, sitting next to my monitor and dutifully serving me, is my dragon Bob. He has the entertaining quirk of turning his head to always look straight in my eyes — undoubtedly an appealing effect, especially for optical illusion enthusiasts like myself.

(Embedded video – If you can’t see it, check it out here.)

If you’re interested, you can build your own ‘Bob’ using a paper model [pdf, 244 KB] (both video and paper model are courtesy of Grand Illusions).