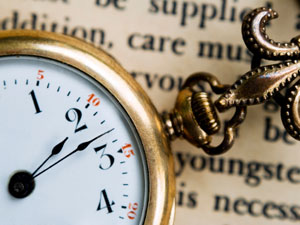 Changing how we talk to ourselves is the easiest and most powerful way to overcome procrastination. No other method that I know of disarms procrastination so rapidly and at such a fundamental level: that of our own thoughts.

The Voices In Our Heads

We’re talking to ourselves all the time inside our minds. Even when you’re not paying attention, these relentless mental debates deeply influence our feelings and, ultimately, our behavior.

The good news is that just becoming aware of such mental dialogues — noticing patterns and turning them into productive statements — is usually all you need to overcome many unwelcome feelings and behaviors.

Let’s see how this can help us when it comes to procrastination.

Consider the following thought, which for sure has crossed our minds many times in the past:

“I have to finish this long, important project. It should already be done by now and I need to plow through it.”

Now, tell me you don’t have this thought sometimes. For me, no other passage embodies our procrastinator’s mind so well: as we’ll see, this small, seemingly innocent thought contains almost every mental block that encourages procrastination. That’s why I like to call it the Procrastinator’s Motto.

We all use the Procrastinator’s Motto (or variations of it) every once in a while. If you’re a chronic procrastinator, chances are you repeat it to yourself very frequently — daily, perhaps.

But what’s so wrong about the Procrastinator’s Motto? In what ways do these words encourage procrastination so much — and what can we do about it?

From Procrastinator to Producer: A Step-by-Step Self Talk Guide

To understand what’s wrong with the Procrastinator’s Motto, let’s break it down in parts:

Now let’s consider each of these six parts in turn, replacing each of them with an empowering alternative. In doing that, we’ll turn the original motto on its head and create a productive call to action: a “Producer’s Motto”, if you like.

‘I have to’ is every procrastinator’s favorite expression. It’s also the most disempowering.

Every time you say to yourself that you have to do something, you imply that you don’t have any choice. This choice of words implies that you feel forced or coerced to do the task — that you don’t really want to do it. That perception, of course, elicits a strong feeling of victimhood and resistance towards doing the task.

The solution to this problem is to replace ‘I have to’ with the immensely more empowering alternative ‘I choose to’.

Everything you do is ultimately a choice (yes, even completing tax forms). Using language that expresses choice reminds you of that and brings the feeling of power back.

For an in-depth exploration about the ‘I have to’ expression, check this early article dedicated entirely to this matter.

When you focus on finishing something, you direct your attention to a vague, highly idealized future. Visualizing a finished project is motivating for many people, but from the point of view of who’s having a hard time starting a task, visualizing a hard-to-grasp future can be overwhelming — even depressing at times.

The solution in this case, then, is not to focus on finishing, but on starting.

Forget for a minute about the finish line, just concentrate on taking the first step. Bring your focus from the future to what can be done right now. We all know that if you start something a large enough number of times, you’ll eventually finish any task.

Starting — all by itself — is usually sufficient to build enough momentum to keep the ball rolling from then on. This is what Mark Forster calls the “I’ll just get the file out” technique, and it definitely works.

Constantly reminding yourself how long and challenging the upcoming undertaking is only adds to the feeling of being overwhelmed, and thus of procrastination.

Any undertaking, no matter how daunting, can be broken down into small steps. The trick is to, on each step along the way, focus solely on the very next smallest, doable chunk of work. Ignore the big picture for a while and just tackle that next short task.

Make it in a way you can easily visualize the outcome coming about very soon. Don’t write a book; write a page. If it still looks intimidating, you may try committing to a time box instead.

Of course, keep the big picture in mind, but use it for motivation and direction as needed, and not to frighten yourself before action.

“This project has to impress everyone; I really can’t blow this opportunity.”

Placing such high hopes on a project only adds to anxiety and fear of failure. Perfectionism arises and only fuels procrastination even more.

The way to overcome this mental block is to simply give yourself permission to be human. Allow yourself to be imperfect just in this next small task.

Focus on giving an imperfect step; remember that you can always refine your work later. Better yet, make it in a way that you can’t possibly fail.

If you’re a serial perfectionist, go one step further and commit yourself to make a sloppy job on purpose, at least at first.

5. It Should Already Be Done by Now → I’ll Feel Terrific

The expression ‘should‘ is usually associated with blame and guilt. When you say you should be doing something (instead of what you’re actually doing), you focus on comparing an ideal reality with your current, “bad” reality. You focus not on what is, but on what could have been. Misused ‘shoulds‘ can elicit a strong message of failure, depression and regret.

The solution is to focus not on how bad you feel now, but on how good you’ll feel after you take action. Yes, directed action — even the tiniest of it — towards a goal is the best motivator I know of. The trick is to bring that expected feeling of accomplishment into the present — and know that the real joy of it is only a small task away.

6. Need to Plow Through → Have Plenty of Time for Play

“I’ve got to work all weekend”. “I am trapped in this laborious project”.

Long periods of isolation can bring an enormous feeling of resentment. This feeling generates a strong sense of deprivation and resistance towards the task.

The way to overcome this mental block is to not allow long stretches of work to creep in your activities. Schedule frequent breaks. Plan small rewards along the way. Have something to look forward to — not far away at the end of a long stretch — but in the very near feature. When rewards are small, frequent — and deserved — they work wonders.

Truly commit to leisure time. In fact, go ahead and make it mandatory. This “reverse-psychology” can by itself bring you to a whole different mindset, both more productive and enjoyable.

How Far Have We Come?

Time to check what we’ve accomplished with all the word substitutions. We started with:

“I have to finish this long, important project. It should already be done by now and I need to plow through it.”

And ended up with:

“I choose to start this task with a small, imperfect step. I’ll feel terrific and have plenty of time for play!”

Quite a change, eh?

Every time you catch yourself repeating the Procrastinator’s Motto or any of its parts to yourself, stop and rephrase it. Then check how you feel.

While it may seem just a matter of word choices at first, when you try this simple way to reframe your thoughts, you’ll see how instantly it changes your attitude towards working on your tasks. Moreover, if you turn it into a habit, you’ll be slowly reprogramming your thoughts, leading to a positive, permanent change in your mindset.

The whole idea of using self talk to overcome procrastination first came to me first via Neil Fiore‘s great book The Now Habit, from which I learned a great deal.

While the book deals with much more than self talk (self talk is just one of the many chapters, check a summary of the book if you’re interested), that chapter alone made the most profound changes on how I deal with procrastination today.