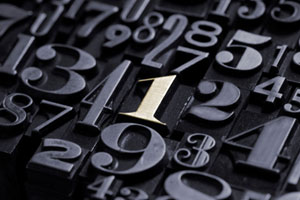 Did you ever want to be able to recite pi up to 22,500 decimal digits? As for me, I never felt attracted to that sort of stuff. But remembering phone numbers, passwords, PINs, birthdays and all sorts of everyday numbers — that’s something I resonate with!

Meet the Major memory system, one of the most powerful techniques around for memorizing numbers. If you think you could use a boost to your memory, or just want to jog your brain a little, here’s a great way to do it. (And yes, you’ll also be able to pull off the pi digits stunt if that’s what catches your fancy.)

How the Major Memory System Works

Our brains are notoriously poor at memorizing numbers. The problem lies in the fact that numbers are abstract concepts. Although they are represented visually by symbols, they don’t feel very real or appealing to our brains. As I explored in a previous article, our brains usually work best using lively, vibrant images. Numbers hardly qualify.

And that’s what the Major system is about: converting abstract, dull numbers into vivid, striking images. When we do that, committing these numbers to memory is a snap.
Let me show you how to do it.

The Major Memory System in 3 Steps

1. Learn to Encode Numbers as Images

The heart of the Major system — and the key to convert numbers to images and vice-versa — is a 10-item mnemonic table. The table shows how to transform the digits 0-9 into corresponding sounds; which we’ll eventually use to form words. The mnemonics are easy to learn (it shouldn’t take more than 20 minutes to fully master them) and, once learned, they can be used for life. Here they are:

As an example, let’s take the (in)famous number 42.

According to the mnemonic table, the digits in the number 42 translate to r and n respectively. Now we need to form a word with r and n. We should fill the gaps between the letters using the ‘neutral’ elements (from the last row of the table: vowel sounds, w, h or y). The word rain comes naturally to me.

42 gets encoded as rain, then.

Decoding from word to number is even more straightforward. ‘Mouse’, for instance, becomes 30 (3 for m and 0 for s; vowel sounds are ignored).

The conversion process may seem a little slow and cumbersome at first, but with just a little bit of practice it becomes second-nature.

There are just a couple more notes to bear in mind:

2. Associate Images in Your Mind

Now for the fun part. We already have an image, now we’ll need a way to glue it in our minds.
The way we’re going to do this is by imagining a scene, a scene that combines two images: the encoded number image along with a peg image that will be used to trigger the memory.

As an example, suppose you want to buy a light bulb, and you must remember that it must be a 30-Watt one. The two images to combine would be the image for light bulb and the encoded image for 30. Using our mnemonic table, we find that 30 translates to the letters m and s. Mouse seems a pretty good word for these letters, so we’ll go with it.

Our mission, then, is to create a mental scene combining light bulb and mouse.

The secret for this to work is to make the mental scene memorable: make it crazy, ridiculous, offensive, unusual, animated, nonsensical — in short, make it fun! (For details on how to effectively associate images, check out this article.)

Let’s see: What’s the zaniest way you can combine light bulb with mouse? I don’t know about you, but here’s what I just imagined:

“I’m in my local supermarket, in the electrical accessories aisle. As I catch one light bulb to observe it more closely… Bang! It breaks in my hand, and a giant mouse jumps out of it! The mouse runs away, squeaking frenetically. Everybody in the supermarket stops and stares at me puzzled and in absolute silence…”

Well, imagine that scene vividly in your mind and try not remembering that giant mouse next time you’re in that supermarket aisle… “30-Watt it surely is!”

3. For Large Numbers, Extend the System

“Yes, but everyone can memorize a small number such as 30,” — you say — “what about the big numbers?”

The great thing about the Major system is that you can easily combine it with just about any other memory technique, simple or advanced. That’s what makes the Major System insanely scalable and able to handle gigantic numbers.

For memorizing a small number we created a mental scene combining two images. To memorize a large number, we need to link many of those scenes together, forming a sequence.

There are many ways to do this. Many people like to create a story linking the scenes together, for example.

My favorite method, however, is to use the Memory Palace technique. In short, you use familiar places for storing memories. If you’re not acquainted with it, check it out here).

The specifics on how to memorize it are a matter of personal preference, of course. The way I do it is by chunking the number in 4-digit groups, and placing each of those groups in a memory palace location.

I’ll use my in-laws phone number (slightly modified), using their home as my memory palace:

“As I arrive at my in-laws’ front door, I see no one but the emperor Nero himself, laughing out loud, as he is about to set the whole apartment on fire! But he has no matches or a torch in his hands: he has a blowtorch — in fact, a rubber duck-shaped blowtorch! And it quacks as it spits fire!”

“As I enter their apartment is the sofa, the first thing I see is a nun chanting and jumping about on the sofa, facing backwards. When I touch her shoulder, she turns around — and it’s actually a witch! She scares the hell out of me — and guess what — she has the biggest nose ever! And yuck — that’s the biggest zit I’ve ever seen” (yes, getting disgusting is also a great way to help your memory!)

This may seem like a lot of work for a phone number, but in fact, this all happens quite fast in our minds. Recovering a number using the process above takes me no more than 4 seconds total — and I haven’t been practicing that much lately. If you practice this regularly, you’ll be able to do it much faster and with less effort.

The previous three steps are the basic tools you need to use the Major system. If you want to make it even more powerful and efficient, one way is to use a predefined image list for the numbers you use more often.

If you use a set of predefined images for, say, all numbers from 00 to 99, you’ll greatly improve your speed when forming images, as you won’t need to imagine different words each time you trip on those numbers.

Of course, memorizing more than 100 mnemonics requires a fair amount of time and effort, but once it’s all in your long-term memory, you can use it for life. To be fair, you don’t need to memorize it (in the traditional sense of the word). Let me explain. If you just start using the mnemonics, the images will soon automatically come to you. I don’t know, but there must be something about the phonetics that makes the images manifest themselves rather easily.

Here’s a set of numbers you can use. If you don’t like these words, feel free to substitute others that are more memorable to you:

What do you think?

I absolutely love using the Major system. It provides a great brain workout — and a warm feeling of relying just a bit less on technology. Even better than that is the amount of wild private imagery to have fun with! 🙂

What about you? Do you have any experience using the Major memory system or any variation of it? If not, do you have any other ways you use to remember numbers? Share in the comments!