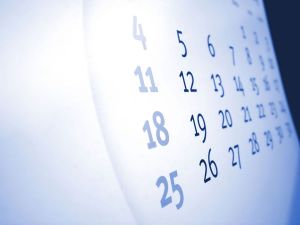 Mentally finding out the day of the week for any date is a skill you can easily learn. You don’t need to be an autistic genius – all it takes is basic memorization effort and some trivial math.

When I first learned this technique many years ago, I did it just for fun. With time, I learned to enjoy the convenience of not needing a calendar anymore. It’s far more useful than I first thought, and with just a little practice, you’ll be able to find out the days of the week much faster than when reaching for a calendar.

To find out the days of the week for any date, use the formula:

If you’re not math-inclined, this may look quite scary at first, but don’t worry: using the formula is straightforward. Let’s walk through each one of of its parts.

The month codes are one of the formula’s most troublesome parts, since they don’t follow a clear logic. We’ll have to memorize them, but don’t worry with that just yet, as we will focus on an easy way to do this later. For now, here they are for reference:

We also need the year code, which are also apparently arbitrary. You shouldn’t also worry about memorizing them at this point. For now, here are the ones you’ll most likely use:

Days of the Week

The result is always a number from 0 to 6, and its interpretation couldn’t be any easier:

Step 2: Apply the numbers in the formula:

Now, if you don’t like the idea of performing divisions mentally, there’s hope: you don’t really need to divide by 7 to get the number’s modulo. All you need is to cast out sevens of the number. That is: take the closest multiple of seven below your number and just take the difference between them. For example, in 17 mod 7, the closest multiple of 7 below 17 is 14. Casting 14 out of 17, there’s a leftover of 3. Therefore, 17 mod 7 = 3.

An additional tip to speed up the calculation: Instead of summing up all the three numbers and calculating the modulo thereafter, as the formula suggests, do it slightly differently: don’t wait until you have a big number to calculate its modulo. You can cast out sevens as you go. Let’s do the same calculation we did above (December 25, 2008), but casting out sevens as we go.

Although there are extra steps, you will always work with small numbers, speeding up the process.

The only caveat in the formula (and it had to have one, right?) is that there will be an adjustment when dealing with leap years: you need to subtract one from the result, for the months of January and February. The other months are calculated just as any normal year.

For the peg system to work, our challenge is to come up with images for the months. Here are my suggestions, based on either similarities in word pronunciation or on cultural traditions.

If these images don’t make much sense to you, feel free to substitute by your own. Remember that the list doesn’t need to follow any pattern or logic; the only requirement is that each association must come easily and quickly to you.

If you did like the images I suggested, here’s a graphical list to help you visualize and memorize them as pegs: 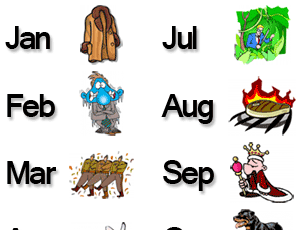 All right, now that we have the pegs, the next step is to create fun and remarkable scenes combining the month images with our previously learned number images. Just to illustrate, let me give you a personal example on how to do that:

August. Looking at our month code table, we see the code for August is 3. Let’s associate ‘barbecue’ (for August) with ‘heart’ (for number 3): Barbecue and heart? The first thing that comes to mind is a childhood memory of the movie Indiana Jones and the Temple of Doom. I always wondered what the bad guy did with those living throbbing hearts he extracted from people in that dark ritual. No more: what about a great barbecue outside, with pulsating hearts on the grill and everybody getting drunk with kegs of Kali Ma’s blood! Childhood memories work wonders for your memory. 😉

This technique only works if you use your own imagination, so now it’s up to you. Always remember to make it personal and fun.

Bonus: Extend the Technique for Any Year

For practical purposes, I memorize only the code for the current year. When a new year arrives and you need its code, you can find it pretty easily: find out the day for current year’s December 31th and just sum one and you’ll have the day of the week for next year’s January 1st. Now, the only variable left in the formula is the year code. Don’t forget about the adjustment for leap years when using this trick.

If, unlike myself, you want to go really wild and mentally find out the days for any year, you’ll need to grow some extra math and memorization muscles. Here’s the formula for the year code:

‘Div’ is the operator for integer division. Just like ‘mod’ gets the remainder of a division, ‘div’ gets its integer quotient. For example, 17 div 7 = 2 (with a remainder of 3).

The century code follows a recurrent pattern, and can be used for any date in the Gregorian calendar:

With that, you have a complete mental calendaring system. This is a handy tool that, once learned, can be used for your entire lifetime. Try it just once or twice, and you’ll see that it really isn’t as much work as it looks like.

Update: If you want the year codes automatically calculated for you, or simply want to see the math in action, I created a downloadable Excel spreadsheet (44 KB) that does exactly that.