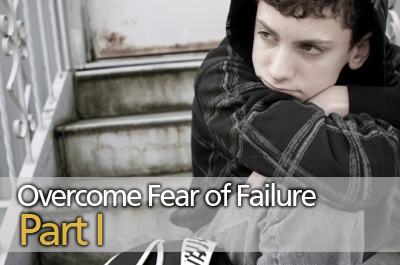 Does fearing failure paralyze you? Of all the reasons for inaction, the strongest one is not lack of ideas, tools, time or money. Usually, the enemy is entrenched much deeper inside our minds. Unless we learn to tackle our fear of failure, we’ll never be able to get the most out of our lives.

In this first article of a two-part series, the focus is on how to create a first line of defense — a “psychological armor” — against fear of failure. Here are 6 ideas to help you look at failure from a different perspective and stop being held back by it.

“There is no failure. Only feedback.” –Robert Allen

We give too much importance to failure, don’t we? We overemphasize it, seeing failure as the final result — as an undesired outcome of something we fought hard for. We miss the point, though, that failure is just part of a larger process — the process of learning and growing.

Have you noticed that some people — contrary to all expectations — seem to only become stronger when they fail? How do they manage?

If you pay close attention, you’ll notice that they have developed a unique mindset: they realize that failing is an intrinsic part of succeeding. They know that every time they fail, they’re learning from their mistakes. A failure is a message that says that something could have been done differently — that there is room for improvement. And that’s why these people don’t seem to care much about failing: they never see the failure as an isolated event — but as part of a much larger process.

In life, failures are not end points: they’re steppingstones. They’re only as permanent as you allow them to be. They’re only final if you accept defeat and stop trying.

2. We can never be a failure

“Failure is an event, never a person.” – William D. Brown

At school we are ridiculed as we fail. As we grow older, the ridicule may become subtler, but it’s always present. That’s one reason fear of failure is so strong in us: failing undermines how we are recognized, accepted and validated by others.

For a long time, we’ve been conditioned to attach our sense of self-worth to the outcome of our actions. Every time one of our ideas fails, it is as though we allow our self-esteem to be eroded. We feel the failure deep inside: it’s almost like we were that idea that flopped.

But you don’t need to think that way. If something you try doesn’t work out, it doesn’t mean you are a failure or a loser. It just means you’re actively experimenting, that you’re trying, and you’re learning as a result. In that regard, the expression to be a failure (or successful) doesn’t make any sense.

If people around you don’t get that and are still critical of you or your failures, it’s probably because they are the ones who do not get the idea about experimenting, trying, and learning. But don’t let yourself down by their negativity. As long as you keep an open mind to experimenting, don’t bother if you keep failing! The people who really care about you will always support you throughout your failures. They’ll never lose sight of the person behind your failures.

3. Failing is the only way to go far enough

“If you hit every time, the target is too near or too big.” –Tom Hirshfield

The only way to know that you’ve gone far enough is to go too far. And going too far is called failing.

That means that if you don’t go far enough — in other words, if you don’t fail — you’ll never know for sure where your limits really are.

Race car drivers know this to the bone. They even have a saying for it: “The one sure way to find out if you’re going fast enough is to crash”.

So if you decide to live a life of “playing it safe” — of avoiding failures altogether — you can be safe in the knowledge that you’ll most likely accomplish your goal — after all, that’s a dead easy target to take aim at. Just bear in mind, however, that you’ll never be able to get the most out of your life acting that way.

4. Failing is part and parcel of innovation

As much as I like creative idea generation, if you want to achieve marvelous things, having ideas is seldom the bottleneck. Putting them to action is!

That’s the difference between innovation and creativity: innovators are not just people having great ideas in a room, they are the ones who have the courage to go out and test them! And guess what happens when they put their ideas to action?

Exactly. They fail. Most of the time.

But every time they fail, they take note of the lessons failure taught them, improving their approach to solving the problem in subsequent attempts.

One of 20th century’s most influential books (and one of my favorites), Zen and the Art of Motorcycle Maintenance, was turned down by 121 publishers before getting published. And that’s only one story of persistence in the face of failure among the many I’m sure you’ve already heard.

Consider this: If you eventually score one success, people will hardly remember your failures. So, even if you have not overcome your ego problem about failing (see point 2 above), you still have a chance: if you just keep trying and score at some point, all your mistakes will magically be gone. 😉

5. Failing is usually not as bad as we picture it

“Experience is simply the name we give our mistakes” —Oscar Wilde

OK, failure may not be so bad after all, but would I be going too far in saying that you can actually enjoy failure?

Seriously, there were times when I was so afraid to fail that when I failed — as expected — I felt immense relief. My biggest threat had been left behind as there was nothing to fear anymore: my mind was clear again. Failing can definitely set you free.

Have you failed before? Was it as terrible as you had anticipated? Well, here you are reading this article, so it seems you survived all right. Truth is, failure is almost never as bad as we imagine. Fear of failure is usually much worse than failure itself.

Too often, people who haven’t failed at anything believe that failing is a disaster. And because they’ve never failed, they believe they know it all. They refuse to learn. Every time you fail, then, look for the lesson behind it and take it as an opportunity to grow stronger, to grow wiser — to be a better person.

6. Everybody is afraid — everybody

“Courage is not the absence of fear, but rather the judgment that something else is more important than fear.” –Ambrose Redmoon

Let me tell you a secret: the next guy is as scared as you are. We’re all afraid of failing. Yes, that includes even the most prolific geniuses you can think of — In fact, they seem to be the ones who agonize more about failing.”

There’s nothing wrong about it. Your fear is perfectly normal: if what you’re doing is at least minimally worth it, fear of failure will always be part of the process. It will never go away completely.

Achievers succeed not because they’re not afraid, but because they overcome fear. Every day. Over and over again. They know fear won’t go away, but they refuse to be deterred by it.

And that’s the fight worth fighting. That’s the never-ending practice we must engage on.

I first compiled the ideas in this article for my own reference. Although most of them may not be new, this is the kind of stuff I keep forgetting at the times I need them the most — and that’s why I decided to share them here. I hope you find them useful.

The 2nd part of this article is about specific strategies we can use to overcome our fear of failure: check it out!