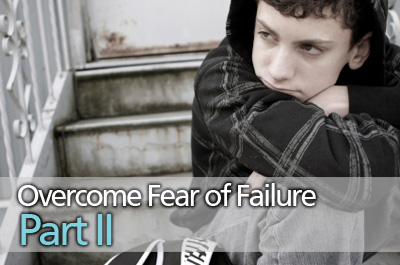 In the first part of this series, we focused on building an effective mindset for overcoming fear of failure. Now it’s time to get down to action: here are 6 powerful strategies you can use to conquer fear of failure right off the bat.

There’s a good reason why acknowledgement is the first step in every 12-step recovery program: we can’t fight an enemy we can’t see. Unless we can fully acknowledge our fear of failure, the psychological armor we built against it won’t be of any use.

Acknowledging our fear of failure, however, is not always easy. Many times, fear of failure comes disguised in subtle forms like anxiety, procrastination and other forms of resistance.

One great way to expose fears is plain old journaling. Another technique that works wonders is chatting with a rubber duck: many times, verbalizing your problem is all you need to clarify it.

Explore the nature of your fear: What is it that you fear about? Is it what people will say about you? What exactly are you concerned about? Try to unearth as many details as you can: the more precisely you can define the reasons behind your fear of failure the better.

Once we have acknowledged our fear of failure no other strategy beats simply taking action. Taking action and seeing results is the best motivator there is. The trick here is that we don’t need to take bold, courageous action: tiny action works just fine.

Tiny actions bypass the automatic fear response in our brains. We may get paralyzed when tackling big challenges all at once, but not when concentrating on tiny actions. And as soon as we have our first small success we start building the confidence to go on.

Small actions also serve another very important purpose: they are excellent feedback mechanisms. Each small step can be used to correct your course of action. A plane is slightly off-course most of the time, but since it continually uses its instruments’ feedback to correct its route, it’s able to get to its destination with precision.

So, think of the tiniest action step possible in your project — one that you’re absolutely sure you can accomplish — and do it now. After you’re done with that, just get to the next one… then lather, rinse, repeat. The tinier the steps, the better.

Uncertainty is a major source of fear and anxiety. Our fear usually manifests itself because there’s at least one aspect of the challenge ahead that is unfamiliar or unknown to us.

The problem is exacerbated as we usually don’t distinguish the known parts of the problem from the unknown ones: we just mix them together into a large blob of fear and anxiety in our minds.

Getting clear about which tasks create the most uncertainty helps boost our mental energy to deal not only with those tasks, but with all tasks in the project.

Many times we tend to reassure ourselves by doing the easy tasks first and putting off the uncertain ones — and that’s fine in the beginning to help us get going — but if you keep postponing the most uncertain tasks, they will not stop haunting you and sapping your energy. So, after we get a little momentum (by taking tiny steps), the most uncertain tasks are the ones we should go after.

Make a list of tasks in your projects identifying the ones that are major sources of uncertainty and then tackle them as soon as possible.

4. Batch Ideas Before Executing Them

Have you considered that fear of failure might be a signal that you may be approaching the problem from the wrong perspective?

If that’s the case, why not have more ideas before jumping into action, then? “Any idea is a bad idea if it’s the only one you’ve got,” someone once said — and I agree.

Having no options is frightening: we start believing ‘success is our only choice’. We believe that the single outcome we envisaged is the only way out, that we must get it right, or else… Obviously, the problem is in the scarcity of alternatives and the terror that this ‘all-or-nothing’ situation elicits.

The way out of this situation is to have many ideas. Lots of them — after all, quantity breeds quality. You’ll not only have plenty of alternatives to make yourself feel safer, but may also solve the problem using a much better idea than the original one.

Refuse to execute an idea if it’s the only one you’ve got. Use any one of the many idea-generation methods available — my favorites are lists of 100 and idea quotas.

As we discussed in part I of this article, failure is part and parcel of life. What does this mean? In a nutshell, if you are doing things right you wil fail. Often.

I roll my eyes when I see dialogue (especially in war movies) along the lines of “What’s the contingency plan?” and the reply is the clichéd “Failure is not an option here.” Guess what, no matter how important the outcome may be, failure is not only an option — but a very likely one.

Especially when we’re doing innovative work, failure is not an ‘unlikely case we should be aware of’. Quite the opposite, it’s the norm. Expect failure and be prepared for it. Instead of pretending failure won’t happen, be prepared to fail intelligently — and learn from it.

Let’s be clear: this is not the same as setting yourself for failure, but simply not getting caught by (too much) surprise when it happens.

One thing you’ll notice is that — and this may sound counterintuitive at first — when you consider failure as a likely result, your rate of success will drastically increase. You’ll think more thoroughly about your problem and become more prepared and confident.

Before jumping to action and simply hoping that you won’t fail, stop for a moment and plan for what you will do when things won’t come through as expected.

We all want to be successful, but have you paused for a moment to consider what ‘being successful’ really means?

I could not finish this series without mentioning that we’re free to define success in any way we want. I know this may sound iffy, but the definition of ‘success’ and ‘failure’ are entirely up to you: you don’t need to adhere to any existing standards — really!

What if you measure success not by the usual notion of looking at the outcome per se but, for example, by how much fun you had along the way? What if you’re in for the learning? What about the excitement of trying new things? There are so many ways something can be successful that it’s really a pity to ignore them all and focus solely on how it can fail.

Let go of the idea that there’s only one successful outcome — and that all other alternatives, by exclusion, are failures: each outcome is successful in its own way. You may not have had the outcome you expected, but you may have learned something new about yourself. Or maybe you have developed your resilience. Or maybe you just had a good time all along.

By all means, be honest with yourself — don’t just pretend you don’t care about the outcome at all: this is not an attempt to fool yourself when you fail, but a genuine attempt to change your mindset and release yourself from the limitation of single outcomes.

This ends this two-part series about fear of failure. As long-time Litemind reader ReddyK wisely pointed out, overcoming fear is part courage and part discernment. Hopefully, with the help from the ideas in this article (along with those in the first), you now have tools to better tackle fear of failure whatever the case may be.

Failure has become a dirty word when it shouldn’t be. Make failure your friend: unless you truly embrace failure, you will never really appreciate what it means to succeed.

Now it’s your turn: What strategies do you use to deal with fear of failure? Share in the comments!