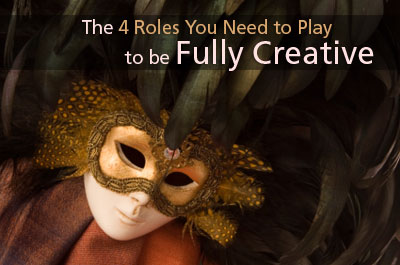 Do you want to be fully creative? To not only have wild ideas, but to actually create and bring remarkable things to life?

There are four distinct roles to be performed for the creative process to be as effective as possible. Each one requires that you play different characters, with different mindsets and skills.

The roles are: Explorer, Artist, Judge and Warrior.

Learn how they help unleash your creativity and how to master the skills each one requires.

Ideas do not come out of the blue. In order to build them you first need to gather the raw materials: facts, concepts, experiences, knowledge, feelings — that’s what ideas are made of. To get all of that, you need an attitude of ongoing curiosity and exploration.

The Explorer is always in search of new things. He is relentlessly curious and never limits himself to a particular area of experience and knowledge. To have ideas is to connect dots. First and foremost you need lots of dots to connect — you need fuel for the formation of new ideas.

How to Develop Your Explorer

The artist has ideas. He takes the raw materials from the Explorer and combines them in novel ways.

When people say someone’s “creative”, they’re usually referring to the Artist. The Artist has ideas mostly by trying new things. He applies his imagination by rearranging, turning things upside down, stirring things up. He pursues different approaches and finds unexpected connections. He’s playful; he doesn’t care about what people expect from him.

How to Develop Your Artist

The Judge is all about “getting real”. His job is to analyze the Artist’s wild ideas and assess if they’re practical — in the real world.

The judge questions assumptions; he compares and analyzes. He checks how feasible ideas are. No matter how much the Artist loves an idea, the Judge looks for counterarguments, checks evidence, and makes hard decisions. Combining gut feeling and analytical tools, the judge must only let through feasible ideas.

The Judge gets a bad reputation — but only because people usually invoke him too early. Killing an idea before the Artist can play with it is a pity; killing it later is oftentimes a necessity.

How to Develop Your Judge

As soon as you have an idea ready to be executed you’ll realize the world isn’t set up to accommodate every new idea that comes along. The enemies can be external: competition may be fierce, or people may just don’t “get” your beautiful ideas. Even harder than those, there are more than enough enemies already within you: think resistance, excuses and fear of failure.

The Warrior’s job is to make ideas happen. For that, you’ll need not only a strategy and plan of action but to put in the hours — fight the daily fight.

That means remaining productive, developing the resilience and courage to overcome obstacles and, of course, being able to sell your ideas — whatever’s necessary to materialize them.

How to Develop Your Warrior

Awareness and Timing are Critical Too

In reality, we all know the path to creativity is not that sequential — explorer-to-artist-to-judge-to-warrior. Usually, there’s a lot of switching back and forth between roles: The Judge may return an idea to the Artist for further development; the Artist may want more data from the Explorer to develop a certain idea, and so on.

This is fine. The main thing is to be aware of which role you’re performing at different points in time. We often get stuck in the Explorer role for too long. Or we may jump the gun and summon our Judge while our Artist is still working his magic. There are so many ways to spend too much or too little time in each role, or to overlap ineffectively.

The lesson is: make sure not only to develop the skill set for each role, but also to play each one at the appropriate time. Be aware of which phase of the creative process you’re in and what you’re trying to accomplish. All roles are equally important: make sure they’re playing well with each other. 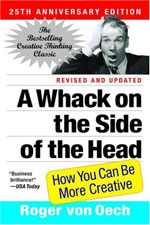 These concepts above are not new. The idea of the four creativity roles comes from Roger Von Oech‘s classic work on creativity A Whack on the Side of the Head, as well as the Creative Whack Pack (which is a deck of cards where each of the four roles is a suit — very fun, do check it out too).

I have had this book for ages but only lately have been applying its principles and becoming more conscious of the steps of the creative process. There’s a myth that creativity needs to be wild and unplanned, that one cannot be trained to be creative. I’m increasingly convinced that that is not true and I will expand on this topic as I explore more. In the meantime, A Whack on the Side of the Head and Creative Whack Pack are two truly excellent resources I recommend for those interested in becoming more creative.